5G: The complicated relationship between ITU and 3GPP

To understand 5G, the first two sectors of knowledge I intended to learn were information about how it works technically, and how the technology impacts our society. Fortunately, tons of good quality resources on the Internet have thoroughly explained the technology and its effects.

As I consumed the articles and videos answering my questions about how 5G works and the impacts of the technology, the specs and standards of 5G in the materials constantly confused me, and raised more questions. Why the latency value mentioned in this article is different from that video? Who's actually building out the technology? Is there anyone supervising and guiding the implementation of 5G? What’s 3GPP, 3GPP2, ITU and IMT?

I was bothered by these questions in my journey of understanding 5G, but I did the research and connected the dots together with helps from the Internet. In this article, we’ll go through an overview of the roadmap of standardizing 5G and the stakeholders of the process.

Understanding the very basics about 5G is easy. Just one graphic can do the job of explaining. 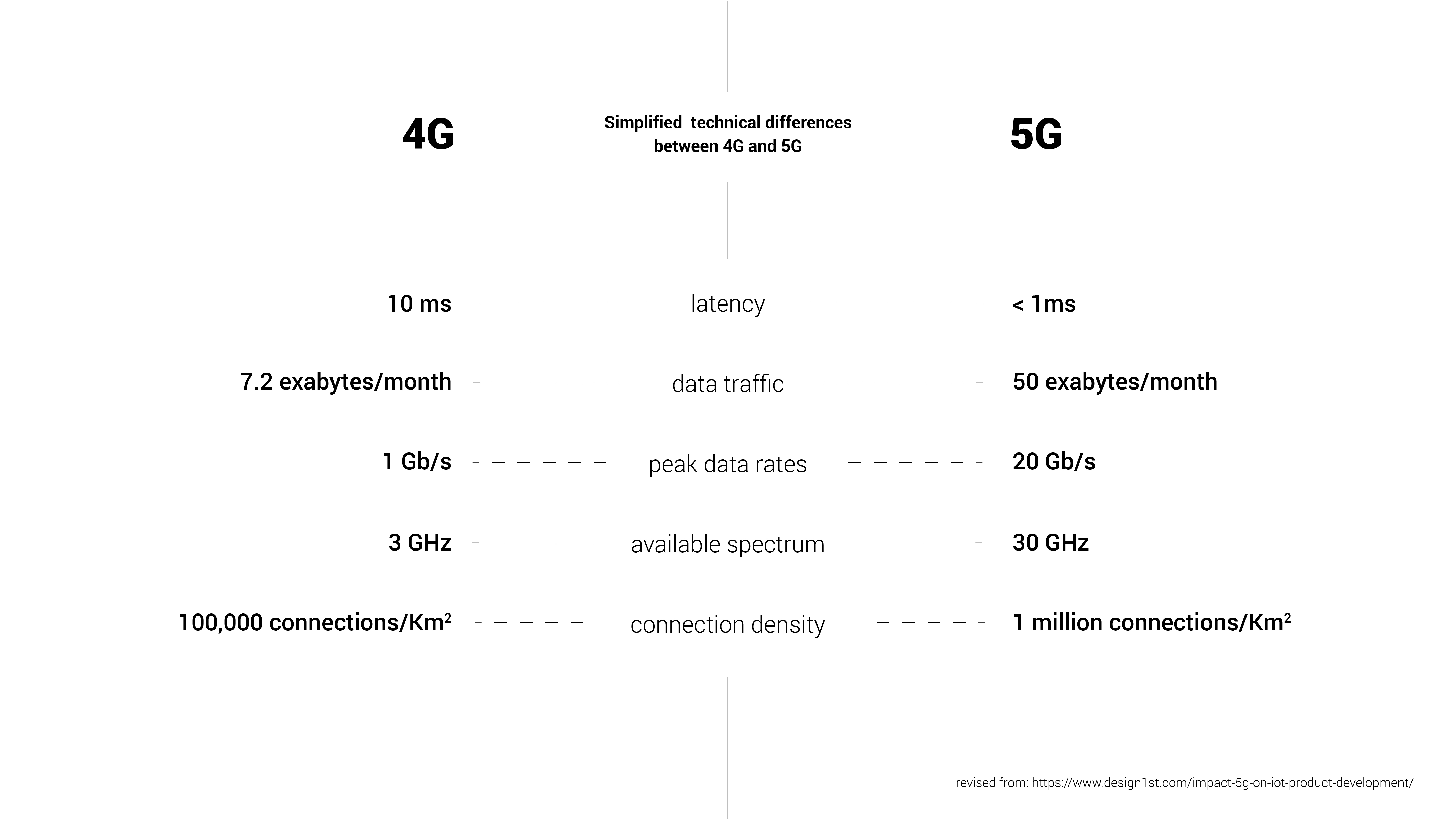 To transition from 4G to 5G, a device has to meet these standards, including latency lower than 1ms, peak data rates higher than 20 Gb/s, connection density higher than 1 million connections/Km2 and more. For most consumers not in the telecommunication industry like me, the numbers don't matter, because all an end-user needs to know is the fact of 5G being faster.

Imagine the impacts that the standard will have on every single stakeholders in the industry, including internet providers and hardware manufacturers. All the 5G related products the manufacturers produce have to meet the standards; if not, no 5G labels are allowed to put on the products. Without a label, one provider or manufacturer would have trouble competing on the market.

How do standards get set?

When the telecommunication industry and governments across the world resolved to evolve from 4G to 5G, they initiated research on exploring possible scenarios of applying this new tech.

The research was followed by several documents of visions of world with 5G in future, written by a union of governments around the world. These are papers that include objectives, key index performances (KPI) and schedules about 5G implementation. But they serve as general guidelines, or recommendations, rather than the actual standards with technical details.

With this guideline as objective, groups of players in the market, including network providers and hardware manufacturers, would start performing detailed analysis on each of the technical aspects. They'd be meeting regularly to set up comprehensive standards for everyone to abide based on their analysis and estimations, making sure everyone is going to develop 5G modules with identical specs.

The standards and the deliverables that the groups of players in the industry define and develop will then be regularly reviewed, to ensure a compliance with the objectives and KPI published in the first place. 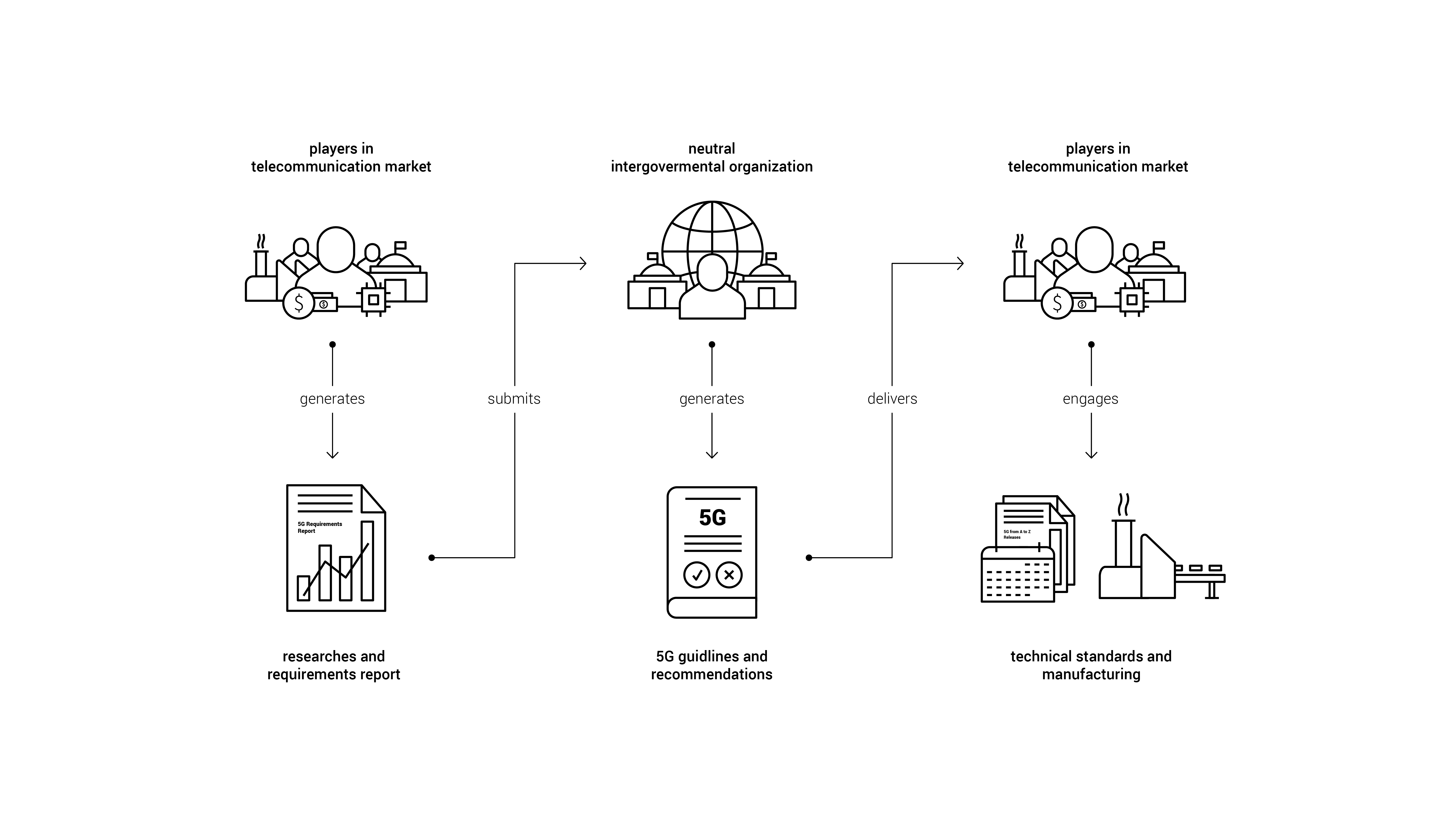 Who reviews and standardizes 5G?

The description of the standardization workflow provides us an abstract picture of relationship between the stakeholders in 5G industry, including the major two roles in the system. First one of which is the intergovernmental organization, in charge of defining ideal KPIs, supervising and reviewing the construction process. The other one is the group of players in the market, which is actually rolling out the real 5G standards, infrastructures and products. Let's get to know their real identities now.

The intergovernmental organization that manages global telecommunications affairs is called International Telecommunication Union (ITU), founded by the United Nations (UN) in 1865. With the goal to "connecting all the world's people", ITU's responsible for issues that concern phone calls, satellites and the Internet.

ITU is the intergovernmental organization responsible for guiding, reviewing and supervising the entire 5G tech. 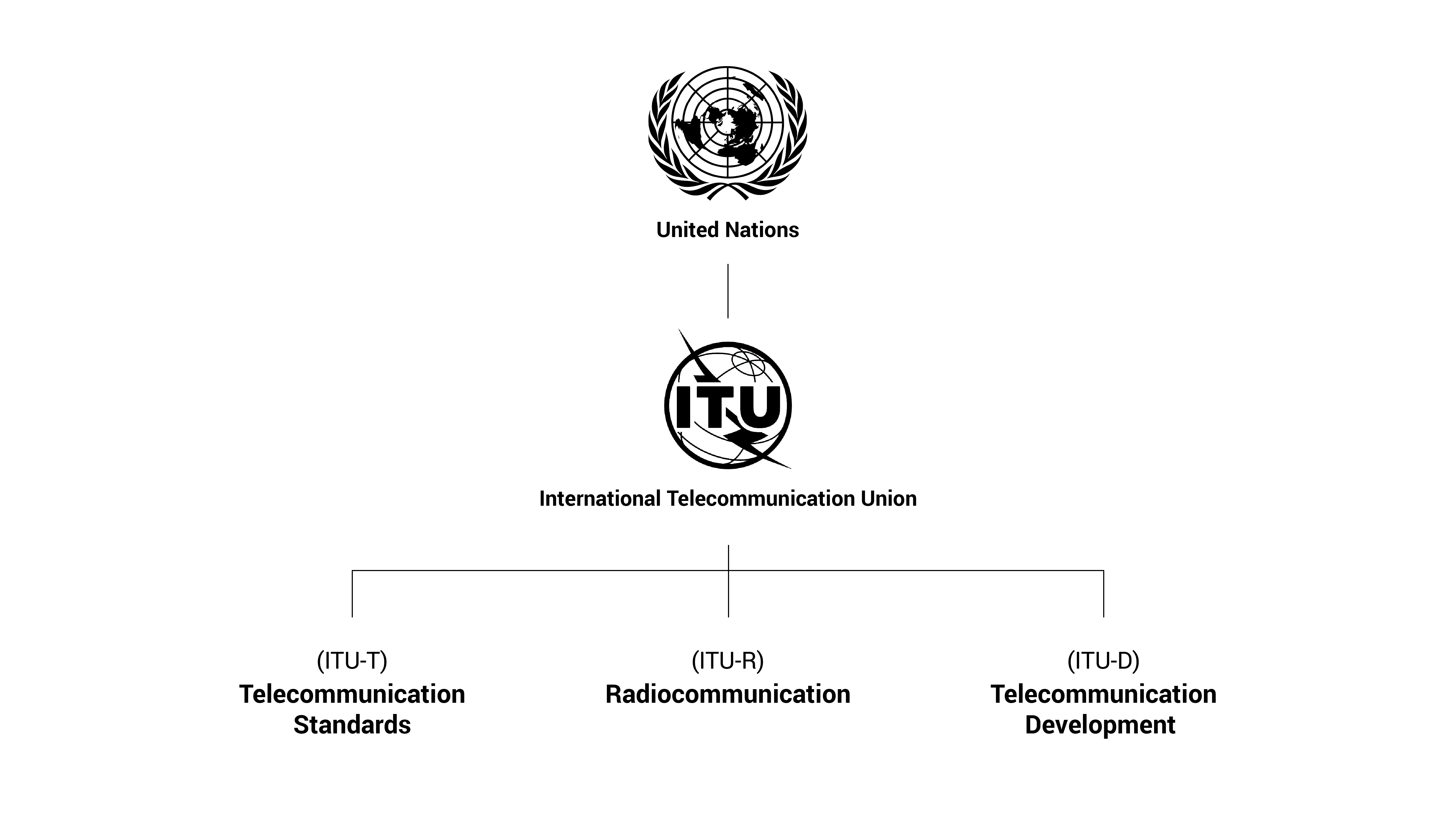 As a neutral governmental organization, ITU doesn't concern itself with how 5G is constructed, but with making sure the constructed 5G network can equally connects people around the world, bringing benefits to humanity.

5G is a product that generates enormous profits in the capital market, potentially shifting power between corporations, companies and even countries. Nations, network providers, hardware manufacturers and all the stakeholders competed for best advantages with strategies. One strategy is to form consortia with stakeholders with same interests, attempting to gain dominance over opponents.

The dominant consortium, or group of players in the mobile telecomm world now is called 3rd Generation Partnership Project (3GPP). It's established originally in 3G era as a standard body behind the Universal Mobile Telecommunications System (UMTS), a system for developing stable and consistent production environment for their members. The major members are the seven Organizational Partners, which are the governmental institute, committee or association about telecommunication matters coming from Europe, Japan, China, South Korea, USA and India. 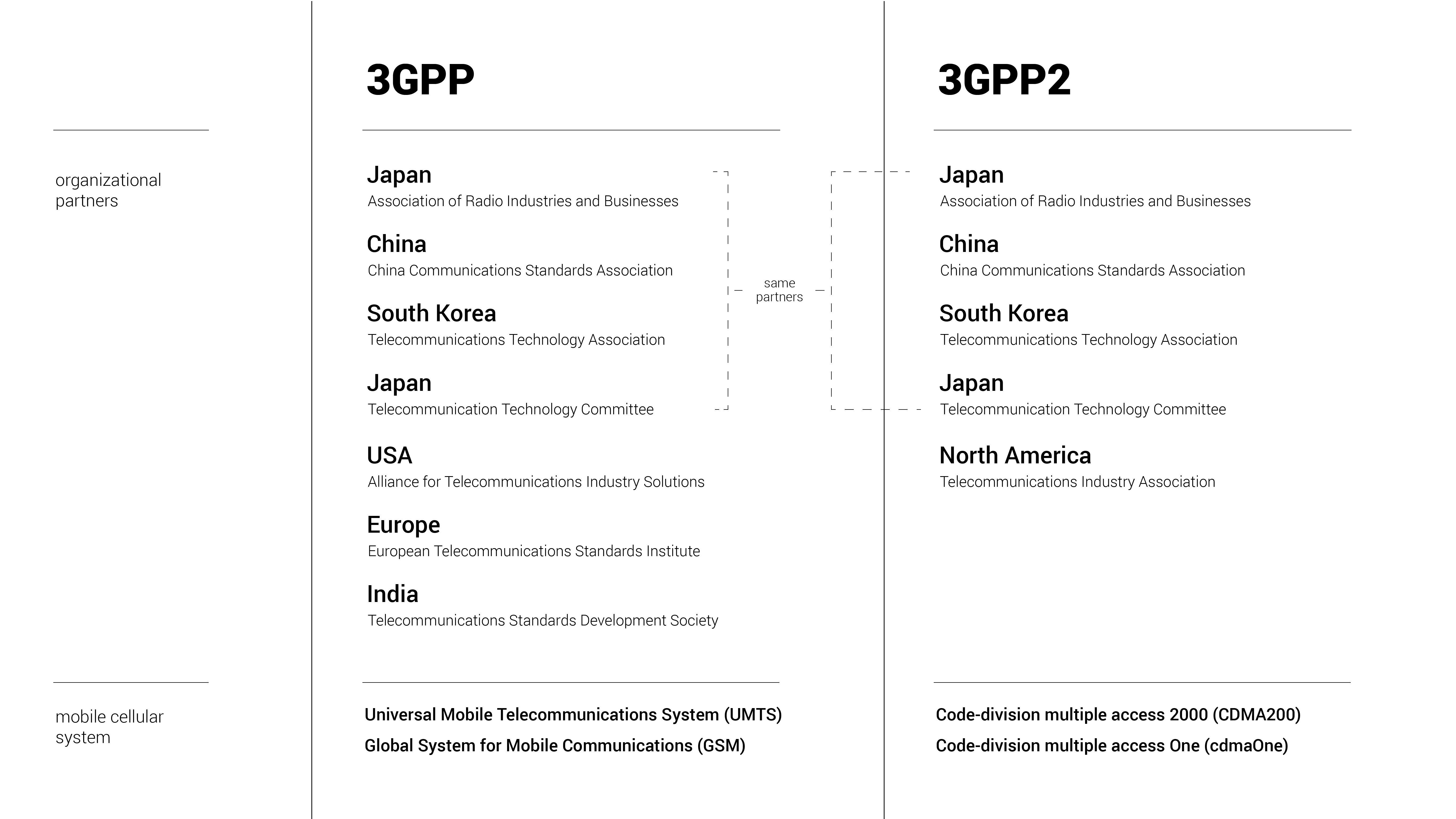 Comparison of partners and cellular systems between 3GPP and 3GPP2

3GPP and 3GPP2 are competitors, and the participants of either group are all trying to gain most profits from the market. This business competition involves complicated factors such as patent, policy, global supply chain and more. In general, 3GPP with its Universal Mobile Telecommunications System (UMTS) is the dominant player in the industry since 3G era.

Fortunately, consumers across the globe can use wireless network with identical protocols and experience, because both 3GPP and 3GPP2 have to develop specifications and standards for mobile phone system that meet the requirements of ITU's guidelines.

The system 3GPP is using to manage standardizing process of specs is called Releases, which ”provide developers with a stable platform for the implementation of features at a given point and then allow for the addition of new functionality in subsequent Releases.", according to 3GPP's explanation. Each release is actually a bundle of standards documents that all the manufacturers have to follow.

Relationship between ITU and 3GPP

Now we know identities of the two major roles in the diagram we looked at above. Let's go over a more detailed diagram with a timeline. 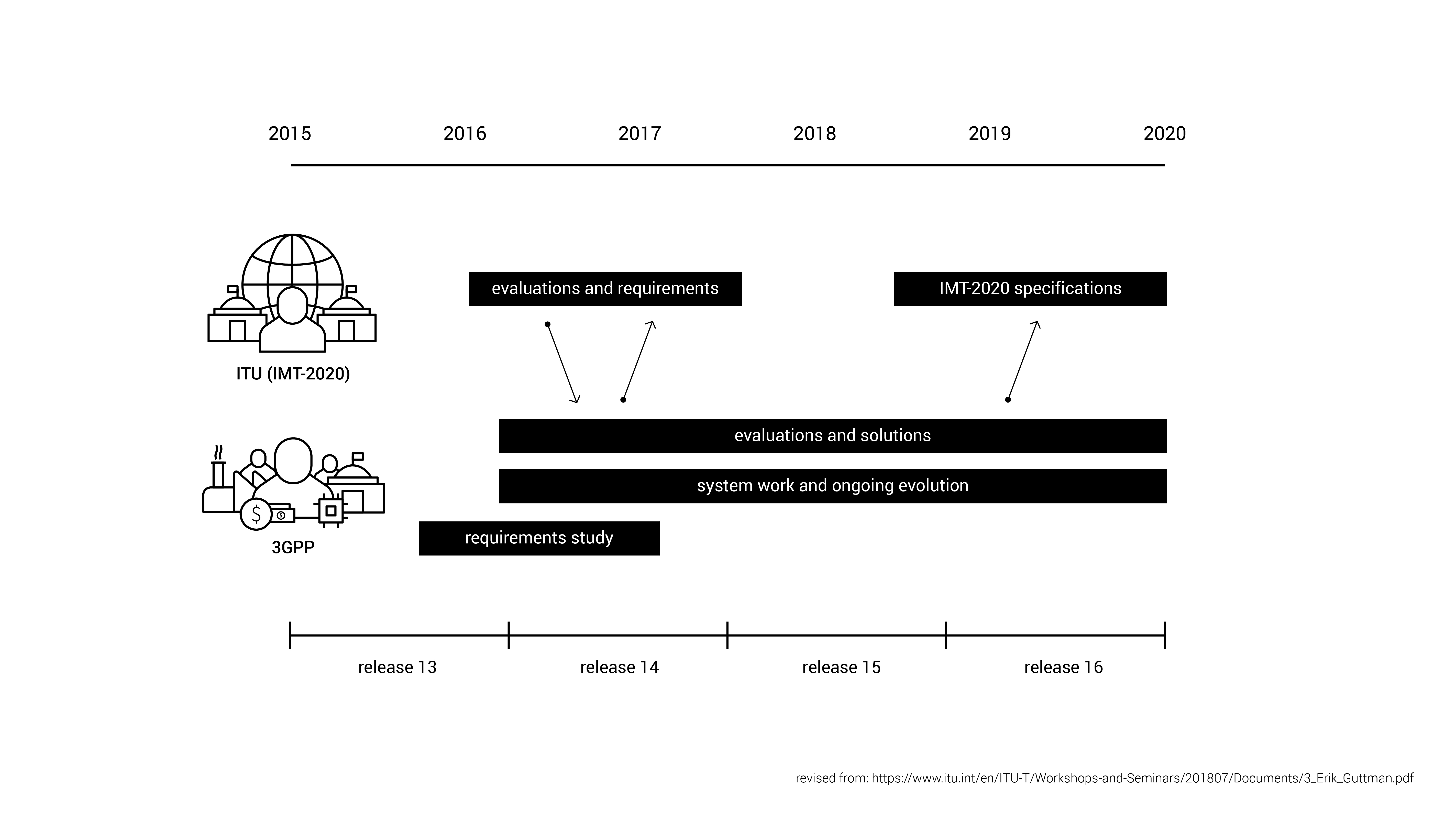 Simplified 5G roadmap and relationship between ITU and 3GPP

The recommendations and specifications that ITU issues have a generic term: International Mobile Telecommunications (IMT). IMT includes the requirements and key performance index (KPI) of each generation of mobile network, and 3G, 4G and 5G complies respectively with IMT-2000, IMT-Advanced and IMT-2020. The diagram above is a schedule for rolling out 5G, started from 2015 and estimated to be accomplished at 2020.

As illustrated, it's not an absolute top-to-down, streamlined relationship between ITU and 3GPP. The requirements to build 5G network comes from 3GPP, which is the one who’s manufacturing, regulating and profiting in the market. The requirements study would then be submitted to ITU for evaluations in order to to revise the ITU’s KPIs and provide a finalized standard. The guidelines are then delivered back to 3GPP for assessing of practical and technical solutions to meet the requirements. This cycle is repeated several times. Most recently, 3GPP rolls out Release 15 and Release 16 at the same time.

To illustrate the cyclical nature of standards evolution, consider the case of 4G LTE. LTE stands for Long-term Evolution), and people might have seen the word from "4G LTE" a lot. The term looks like an advanced version of 4G, but it's actually 3.95G, which means it doesn't fit the requirements set by ITU's IMT-Advanced spec, hence not allowed to be sold with a 4G label. Nice job to protect consumers from being tricked. But because of the marketing concerns from the industry side, the term LTE was agreed to put together with 4G. And this is how the confusing "4G LTE" term came up.

In the end of 2019, the moment as this article is published, the news about 5G rolling out and latest phones with 5G connectivity in 2020 are all over the place. It could be overwhelming, but having a basic knowledge of standardization and supervision parts of 5G technology is helpful for deeper understanding of the impacts of this cutting edge mobile network system in global scale.

For example, with the awareness of 5G’s connection to public sectors such as International Telecommunication Union (ITU) and UN, business and political unions such as Generation Partnership Project (3GPP) and 3rd Generation Partnership Project 2 (3GPP2), and proprietary technology such as Universal Mobile Telecommunications System (UMTS) and CDMA2000, we can understand the news about geopolitical fights, 5G market and general impacts of the technology better now. As a consumer who’s concerned about not only potential benefits, but also the impacts of 5G, having this 5G technology literacy matters.

Taking a step back from the complicated world of political and business fights, learning how 5G works is very fascinating as well. Starting from understanding the history of cellular networks, learning technical details about millimeter waves and beam forming and 5G mobile networks are also highly recommended.

Keep learning more about 5G and its future impacts, and looking forward to embrace new era of mobile network together.